I was scrolling through my FB feed last Friday while waiting for Jr to drift off to sleep on the baby monitor –  and suddenly there it was – a short simple statement that stopped me dead in my finger-flipping tracks:

My coffee house was closing.

Except it isn’t really MY coffee house – I haven’t gone there with any regularity in almost 10 years.

Andplusalso – it isn’t really my coffee house, because it has been pretty much EVERYBODY’S coffee house in the city and surrounding suburbs, at one point or another, in its 28 years in existence.  It isn’t MY coffee house – it is THE coffee house.

Mine is just one more love story to tell in a mountain of homage to a place that was equal parts rebellion, magic, familiarity, and genuine hard-earned character.

I was 15 the first time I went to Paris on the Platte.  I wasn’t QUITE supposed to be dating yet, but I was, a boy 7 years older than me at a time when that was a lifetime of difference (and when the last thing a girl wants to admit is that there is any difference at all.)  I would wager a guess that me and Older-boy had my male BFF in tow – so “it wasn’t a date”- the first time I saw Paris in all its smoky, jam-packed, weekend glory.  It was heaven. Older-boy broke my heart down the road a year or so, but he gave me Paris, and Paris never did.

At least one night a weekend was spent there for the majority of my high school existence – countless teenaged dramas unfolded there over Crowbars and Davidoff oval-shaped cigarettes…. break-ups, make-ups – marathon study sessions… marathon anything BUT study sessions.   A steady stream of dates ushered in and out by BFF, myself, and our tight-knit little group, all of whom  had not a chance of surviving the grilling the others would put them through over a few pots of java.  (Hell, we even judged you by what you did or didn’t put in your coffee.  Teenagers are tough critics.)

Senior year it was there we went the night before graduation – where else but the place we first found our wings would we all go the night before we were given permission to truly stretch them and try to fly?

Off everyone else went to college, but I felt drawn instead to the city, choosing to go to school downtown on a (way back then) commuter campus.  The night before I moved to my freshman apartment , I met up with a friend at Paris and came out to find the window of my Jeep had been smashed in (using a piece of the old 15th street viaduct they had torn down from above the dirt area where we used to park – I still have it to this day,) and my backpack stolen.  When the police officer asked for my address, I gave my parents’ and said “but I am moving down here tomorrow” and provided that address as well.  The officer smirked and said “heh heh, Welcome to the city.”

Paris was the first thing I loved about a city I would come to love more than that naïve, excited kid I was could ever know.

The first  year I was in the city was lonely – I went from weekend visitor to full-on every-night regular at the bar behind the counter.  It  was my social center.  There were friends made, boys met, life lived… time passed, things changed.  Paris didn’t.

in the summers Sissy (not yet Dr. then, just Sissy,) would step in as an extra barista to help with the high volume summer vacation time period there.  Life revolved around Paris.

I left college for culinary school.  I left culinary school for life.  “Life” turned out to be a job opening Paris on week-days, coming in at 4:30 a.m. to bake and get everything going for the day.  Watching the sun rise over the city and break on to the railroad tracks across the way.  Then eventually watching the apartments across the street being built.

I was working at Paris when all my weird symptoms turned into a Multiple Sclerosis diagnosis.  It was my roommate, a fellow Paris on the Platte employee, who saw me through my first, horribly long and side-effect-laden nights when I started the injections that seemed IMPOSSIBLE to keep inflicting on myself.

When the doctors told me that the heat of a commercial kitchen would never be a responsible work environment for a person with a heat sensitive nerve-damaging disease, it was the little kitchen in the back of Paris on the Platte where I worked my last day in the culinary industry. It was Paris where I walked out the back door in tears, not knowing what would be next.

Later I brought my designs to leave on the counter by the cash register when I was in floral design school….  and I studied for finals spread out in the sunny tables tucked in the front windows as an even MORE non-traditional student when I emerged from my post diagnosis fog and returned to finish my undergrad degree.

After graduation, as a new bride starting both a marriage and (ANOTHER) brand new career, my visits became less frequent.  I would drop by for a to-go coffee on my way to or from REI, or brunch across the highway with girlfriends.  Life got busy and time passed. I left my city. A blink, a breath, and the news that this weekend would be THE LAST weekend for Paris on the Platte.  Like many I made it a point to go, to linger a bit, chat with Faye, the owner, and use it as an excuse to let Jr have chocolate cake for breakfast: 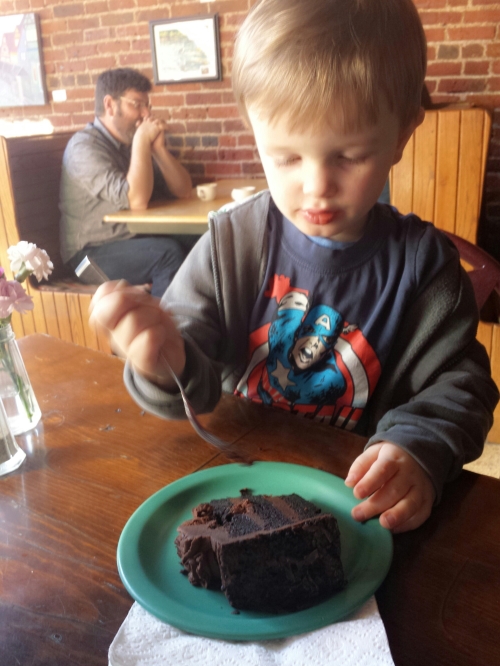 There can be no love story of Keri and her city without countless mentions of that eclectic, evolving, perfect little piece of Denver –  my understanding of the city and all I love about it began there –  and I know I am one of so very many who found within those walls a touchstone for their own lives.

Tagged as Paris on the Platte

One response to “Au revoir, Paris.”