This, my good readers, is a Big Green Egg.

Actually – this is THE MR’S Big Green Egg – a Christmas present from Dr Sissy’s husband, Dr BIL, who has a serious Grill-mance going on with his own BGE (those in the know abbreviate it… because that is how cool they are.  I am probably not.)

I confess it took us 5 months a hot second to get up the nerve to tackle assembling the thing, but all of the other ILs that had received one in Dr BIL’s frenzy of  BGE gifting assured us that it was easy to do, and then we would instantly want to use it to cook ALL THE THINGS.  (I use “we” like a Royal We here, referring to me… because while The Mr tells many tales of his past outdoor cooking prowess, he has not demonstrated it to me in our 15 years together.  So long live Queen Keri, may WE ever grill on and on.)

Not going to lie – we fucked up the assembly in kind of the biggest way you can fuck it up.  (This time the “we’ actually means The Mr, but you know… whatever.)

BUT we got the severe underbite fixed eventually (not even kidding, it is like having a needy child,) and I was pressured to ready to get to smoking.

Here is the thing.  In my past four years of being VERY Reluctantly Suburban,  never have I EVER been so reluctant about anything as I was about this damn Egg.

In all my English Lit Degree nerdery, immediately named it Moby Dick…  it was my White Whale.

As it turns out, I am not great with fire.

No wait….that isn’t really it.

I am beyond unreasonably completely ginormously terrified of fire.  (Remember the Lantern Fest?  Yeah.)

See that pretty little Grill next to the White Whale? 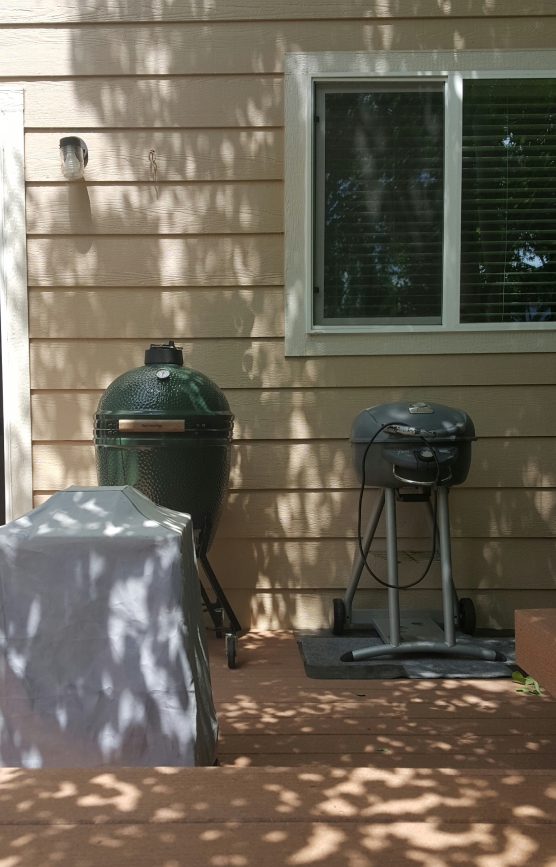 That’s my sweet baby grill – the Charbroil Patio Bistro.  Hello lovely.    The Patio Bistro is PERFECT for highrise living – it is electric, but it isn’t one of those Foreman grill/glorified panini press/ why bother situations… it has an open grill grate positioned over basically an oven heating element.  GENIUS!!

I cook up a storm on that sucker.  And on my  flat top electric stove (So even! So clean! So safe!)

Then I settle in to watch the flames dance in my fire pit that burns giant cans of Sterno.

For reals… Keri no likey the fire.

I was the only girl scout in Troop 1062 to NOT get her fire badge.  In culinary school I LOATHED the gas stoves that everyone else adored. I have been perfectly happy keeping the Patio Bistro cooking along for the past 4 years, though we are now FAR from our 6th story patio and I could switch to something different.

Except here is this damn egg.  And I have to fill it full of this fancy lump charcoal and light it on fire and get it going really well…  on my  back patio. ON PURPOSE.

There were some stops and starts, people.  And day drinking to calm my nerves (except then I was like “OH SHIT, now my judgement is compromised… am I fit to tend the flame!?)

And many, many, many, MANY calls to Dr BIL for advice, reassurance, moral support, (and even for drink recipes… because seriously, needed the booze. )

So I filled up the bottom with the charcoal and placed the little starter blocks around the pile, said a prayer and lit those puppies up. 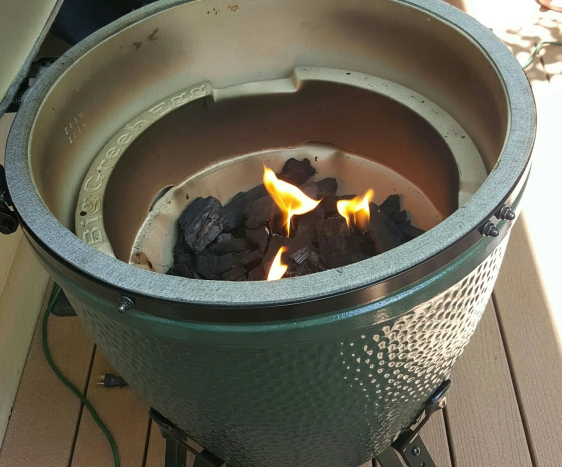 Now it IS called a smoker…  so I shouldn’t have been so surprised.  But it was SMOKING LIKE HELLFIRE as it got going.   Like Whoa.  Like how did the neighbors not think the back of The Casa was en fuego, yo?

So I thought it was going good enough, and the smoke and the OPEN FLAMES were making me pretty nervous, so I set the plate set down inside over the  flaming situation, and then shut the lid and said a prayer (Ok, there was pretty much continuous prayer after I saw all that damn smoke.)

I threw open the bottom vent as wide as it would go, and (after putting the whole situation out from lack of air – stupid high altitude,) I pulled the daisy wheel off the top completely, (note how I use BGE terms comfortably now, like Elle Woods and legal jargon, amirite?)

EVENTUALLY, after panicking and cutting the airflow off several times resulting in having to relight, I got it to a good even temp and tossed on some Brisket and Ribs.

I had The Mr… I also had the Mr’s parents.  That is a WHOLE mess of people from Texas to be around if you jack up your cook, yo.

ANDPLUSALSO, there are all of these horror stories on the interwebs about people who open their Egg too fast and cause a rocket like flame up that takes every hair on the top half of their bodies or whatever, and you know, there’s that whole “ SCARED SHITLESS OF FIRE” thing I have going on, so no pressure there, RIGHT!?

But I managed not to burn the house down, and also to actually keep the thing lit (after a few false starts due to my chicken shit nature,) and dinner that night was good.

The  guys of the ‘hood are all uber excited about it, so maybe I can get The Mr  hooked on smokin’ in the future, eh?

In the meantime, I would tell you not to call the fire department if you see a TON of smoke rolling up from the back of our house…  but we have some hot fire men, yo.

So, better safe than sorry… Right?