And to mea culpa about how that is why there has been such radio silence here and, wow isn’t that just such a thing, and blah blah blah…

But ya know what? Not really… I mean yep, busy-is-as-busy does and all of that, but the truth is life has been moving at the speed of, well, LIFE, since I started Reluctantly Suburban; and throughout all my past writing endeavors since that fateful time in whatever moment of middle school angst that I put number 2 pencil to Big Chief tablet and wrote “dear diary” for the first time those MANY years ago.

Writing is flexing a muscle, and just like a really good gym habit, it is mesmerizing how easy it can be to find that you have semi-accidently fallen off the wagon into the avoidance abyss.

It’s funny that my thoughts regarding writing turned to those prickly, emotional, Dear Diary days of middle and high school, because I guess in a way the memories of those times are what hurled me head-long out of the uneasy avoidance I have adopted regarding writing and planted me firmly in front of this screen.

I have started and abandoned countless updates in the past months. So much has happened, but nothing would finish itself on paper, and I wasn’t inclined to push –so I just let them all lie quiet and undone.

Ok ok ok… stay with me, and be kind to me – because this isn’t going where you think it is at all.

I didn’t grow up obsessed with Dylan McKay. Don’t get me wrong –we loved some 90210 around our house growing up – Dr Sissy and I were squarely in the target age demographic for sure.

But the closest I would come to crushing on LP was during his “8 Seconds” stint – and that was more of a Lane Frost thing (if you haven’t seen that movie, it is worth tracking down, just sayin..)

I am not the person who has been secretly bingeing BH90210 seasons in the bathtub or anything – it was what it was and I hadn’t thought much of it since the final episode which aired shortly before I met The Mr.

So no one was more surprised than jaded-old-lady-me when I stumbled on some reruns on Pop TV today and, while watching that first season plot line unfold, and seeing him so young – suddenly I was crying. And then I was telling myself out loud “this is stupid, why are you crying? Stop!” (spoiler – I did NOT stop.) 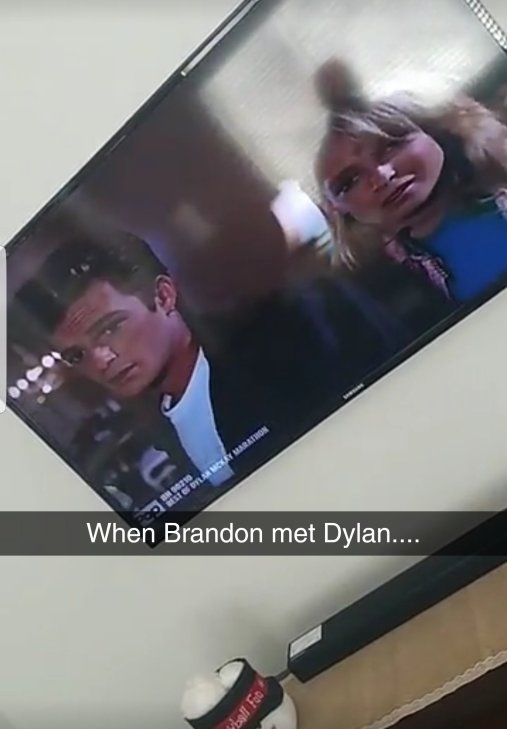 I sat there – watching Dylan break a flower pot and bare his soul to sweet-but-not-silent Brenda about his shitty dad (deep stuff, Aaron Spelling, ) and I felt the weight of the immense amount of time that had passed since we all first rooted for Dylan and Brenda (now I guess it would be that we “ship Bylan”,) and momentarily feeling so ancient and far from that.

But in the next breath it was the exact opposite. This man – this person that The Mr and I watch play Fred Andrews every week on Riverdale, this person who is very much our age, is dead.

Because not only are the teen heart-throbs we grew up with playing parents- and even grandparents- at this point, we have reached the age where they, and so also we, can wake up dead. (I know, I know… but just go with me on it.)

Life WAS the explanation. He had a fucking stroke, and then he died, and seeing him again, suddenly as a young man on the TV felt like a lie…. and seeing him there talking and breathing and parenting Archie when we settle in tonight to watch Riverdale will feel like a lie.  And the whole thing is just really overwhelming,  and brings up a bunch of shit that brooding pragmatic GenXers are really crappy at processing where we are in our timeline anyway…..

So I guess crying wasn’t so weird. Because this is actually a big one for us. Its that 1st one that feels like it could be because of his age – and look, I know he was young.

He was the kind of young they mention when old people don’t want to think that they are in the age bracket where you can just be suddenly gone, so you say “my god he was so young.”

And that is scary. Because we know that is where we are too. We are in that range where you say you wish you had done this or that when you were young and well-meaning folks semi-truthfully say “oh you still are young” – but it isn’t YOUNG…. It’s “still capable of doing stuff if you want to and maybe get lucky.”

I think as a generation we have accepted that we aren’t the young driving force behind the future of everything… hell I am not sure we ever felt THAT way.

I think maybe now… we know.

One response to “Young Anymore”