So part of this whole “move out to the burbs” thing (which incidentally happened 4 years ago next month, 4 YEARS, people,) was my understanding of a need to force myself out of my comfy little urban safety zone.  For myself, but REALLY for my kiddo.

As much as I want Jr to love the city (and I really still do want that for him,) I wanted him to experience ALL the awesome that comes with being a Colorado kid.   Mountain adventures, of course… but also the wide high plains that spread from the base of the foothills; the history of the mining towns and windswept railroad stops turned suburbs; all the personalities and peculiarities of the different areas of our amazing home (hashtag native pride – sorry, I can’t help it….  I love my home state.)

Andplusalso, in general I want him to see his mom be brave. To break out and try things and have new experiences with him. To fill his heart and his mind with wonder and joy and excitement for everything. 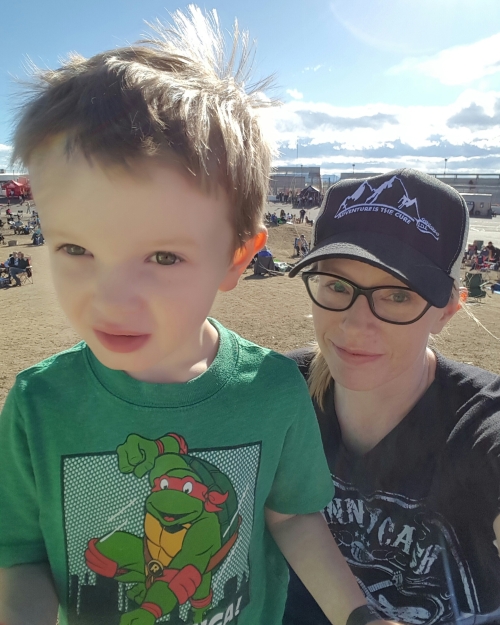 That, good readers, is what brought Keri to Colorado National Speedway on a windy afternoon last Sunday.  With The Mr and Jr in tow. To wait until WAY past bedtime.  And then light shit on fire.

In early March after a couple of glasses of chardonnay (duh) one night, I got a text from a friend that Lantern Fest was coming to the Denver area.  It had only ever come as close as Colorado Springs, and I was equal parts enamored and anxious seeing pics from past events.

Jr LOVES him some Tangled.  He is in awe of the idea of the floating lanterns that Rapunzle’s family sets off each year on her birthday.

I credit the wine and the conversation that The Mr and I had been having that night, along with a “ITS YOUR LAST CHANCE AT THIS PRICE!” FB notification, because before I realized what I was doing, I had The Mr’s AMEX in hand and I was buying tickets and signing waivers and planning a great big surprise for Jr.

Have I said that before?  I think lighting shit on fire on purpose is crazy talk. I was the only one in Girl Scout Troop 1062 to not get her firestarting/safety badge.

I still cook on our electric grill – 4 years past us giving up a highrise patio where no other grill was really allowed.
Our fire pit “burns” glorified cans of sterno instead of actual wood.

So lighting things on fire and sending them floating into the sky seemed about as dumb as could be to my rational mind….  But chardonnay causes bravery and love for my kid above sanity, so we were going, damnit.

The wind was whipping on Sunday when we arrived to partake in pre Lantern-launching events.  The first night of the event on Saturday had seen high winds and at the last minute the actual launch had been canceled by the fire marshal (understandable) so I was hesitant to tell Jr what the end goal actually was even as we staked out our spot on the motorcross hills inside the track. There were bouncy castles and dirt hills to run on and vendor booths to look at;  and a stage with hoola-hooping and dance contests and all kind of things to keep him busy.  Why disappoint with what might not be.

The sun started to set….. the wind was gone.

Festival staff started to light fire logs in metal buckets spread out throughout the track infield.  We broke out the provided smores kits and Jr toasted his first marshmallows with his newfound friend from our firepit.  Oh my heart.

He wrote his name on a lantern….. he ran around against the backdrop of the Colorado plains his momma loves so much in the dying light of the day.

The crowd was big, but when the time finally came, and the last light left the sky, all was quiet for a few moments that stretched into eternity as everyone lit their lanterns.

The Mr lit one of ours…. He held it not knowing what to expect, and then just as I was pointing out the flood of lights in the sky, up ours finally went as The Mr pointed at it.  Jr was fixated.

We watched the entire sky light up and float off. He kept his eye on our family lantern, as it mixed into the crowd of lanterns and floated into forever.

Silly Keri teared all up, of course, and we all stood and just watched the lanterns turn to glowing dots in the vast dark night. 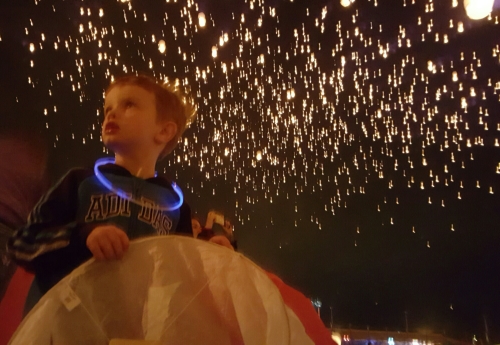 Of course there was the typical traffic jumble associated with any large event ending, AFTER we found the Mr Mobile which was much tougher to do than I imagined it would be on our way in.  But it just didn’t matter.  Jr chattered excitedly, not showing signs of the grumpiness that I was sure we would see 3 full hours past bedtime.   When we got home I stripped my sleepy, smiling boy of his smoky clothes and kissed his little head goodnight. His hair smelled like campfire…. like experience and adventure.

I can’t say for sure what those moments will mean to him as he grows; but in my mind and heart I will always have a little piece of him at 5 years old, in the glow of a thousand lanterns, silent and sweet in awe and wonder.

For that I will push out of my comfort zone always.