These are Jr’s glow-in-the-dark wall stars.  He earned them after 2 weeks straight of awesomely pleasant and peaceful bedtimes. 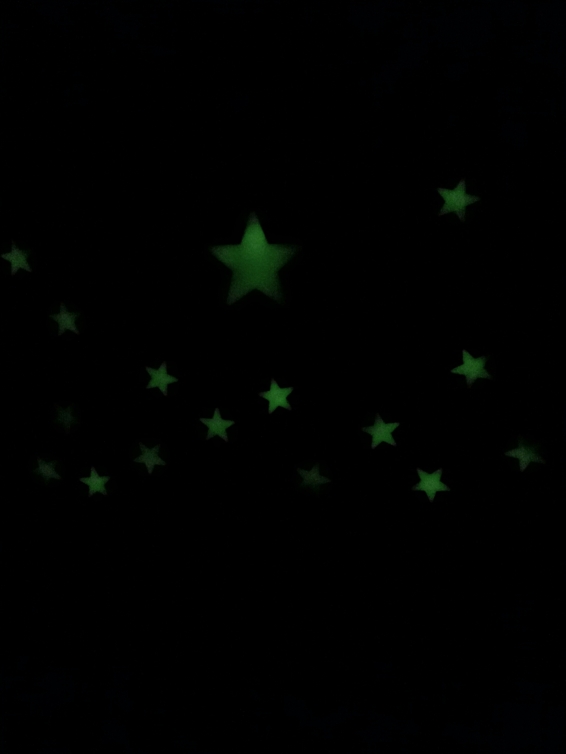 He lovey loves them so, and helped me stick them up around his Spider Man poster on the wall where he can best see them as he drifts off to sleep.

That was exactly 3 nights ago.

Then last night, in a blaze of mortifying pre-school tantrum glory that I still haven’t been able to pin-point a reason for, he lost them all in a bedroom cage match of parent/child wills that will live in infamy in the annals of our family.

With all the screaming, bed-stripping, arm flailing, insult and stuffed buddy hurling gusto he could muster going on for a surreal amount of time, there is no doubt it was  NOT his best moment.

I can also say it wasn’t mine.

I saw things beginning to escalate when he started wrestling a bit with his Superman sleeping bag and reminded him that he could lose the stars if bedtime went bad (right to a threat?  REALLY KERI!?  REALLY!?)

Then I whipped the sleeping bag out of his bed, and went right down the check list of stuff I could take away if he didn’t cool it.

What happened to the “Yoga poses to help your child calm down” article I had read over and over recently, trying to prepare for just such an occasion?  What happened to me staying calm so he would?   WHAT HAPPENED KERI!?

We had two weeks of great bedtimes under our belts, so what hellish moon were we now under to be guiding us both down such a crummy path so quickly?  How were we suddenly there in the near-darkness of his bedroom, him jumping up and down on his bare mattress in his button-up santa jammies next to a pile of ripped off bedding and yelling; and me furiously plucking stars of the wall while stating “now you have to start all over friend, isn’t that sad!!!?”

Consequences?  I am 100% down with consequences.  But this?  I think if I search deep down in my hurt-mommy-heart, this was more just me being hurt and turning it back on him.

This was so far from my finest moment in mommydom that my view of those moments faded away faster than the baggie of glowing stars I chucked angrily into the hallway.  This was a low.

After the dust settled and Jr was asleep in a tantrum-exhausted heap in his bed, I put one star back up, near a leg at the head of his bed where he won’t see it.  But I will.

And I hope it reminds me to just try the damn yoga poses next time.